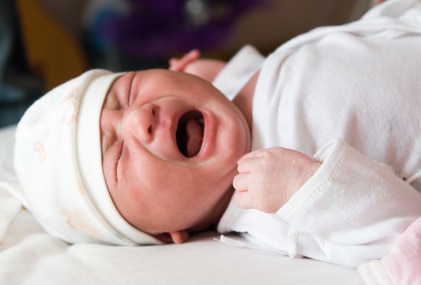 It is natural for parents to wish that it were easier to communicate with their child, to create an instant understanding of what they are trying to convey to avoid the stress and tears, but newborn communication, both in terms of the baby’s development and the connections made, can take time.

Newborns learn to understand the world around them slowly and gradually develop new ways of showing that understanding and communicating with their parents.

It begins with crying but this will soon pass as gestures and expressions become more valuable and effective and, eventually, they will begin to talk.

At each step of the journey, it is important that this communication is a two way street and this guide will show you why.

For very young newborns, crying their only form of communication.

It is a primal response straight out of the womb to alert their parent to their needs and will soon be used for everything from signalling that that need a nappy change to a desire for food or sleep.

At first these cries can sound a lot alike, something that can become frustrating to both parent and child as you struggle to provide the aid that is required, but with time and patience it is possible to distinguish between the cries to determine their meaning.

For example, you may come to realise that there are differences in pitch and length between cries of hunger and discomfort and this will allow you to respond more effectively.

There is still great importance in two way communication at this early stage; babies cannot offer a dialogue or much input in the early stages aside from these cries but any response that you can make will help them to understand that their needs are being understood and they are being listened too.

Knowing that there is that caring presence in the room attempting to communicate will strengthen the bond and offer much needed reassurance.

One of the most rewarding parts of being a parent to a newborn is the level of devoted attention that they offer when you are in the room and talking to them helps with that.

They are building upon that bond and the relationship of the care giver and taking great pleasure from the sound of your voice.

Before speech comes into play and a baby can communicate effectively with sounds beyond their cries for help and attention, they will use body language to express themselves through a range of different movements and facial expressions. 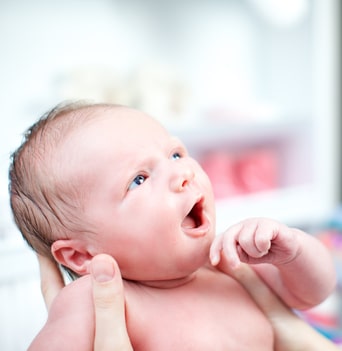 Some babies may start to move their arms and legs in response to what you say, they do not yet have the verbal skills to mimic a spoken response but there is still a desire to communicate back and be understood.

The waving of an arm may have no deeper meaning than that they hear you and wish to join in with the conversation but it is worthwhile doing the same for them, waving back to show a level of understanding and an appreciation for their attempts.

The same can be said for smiles and even frowns, once a baby smiles at you it is infectious and difficult not to reciprocate but mirroring this gesture again offers that connection and reassurance and it is the same for a frown, they are going to be relieved that the message is being received and will not see the frown in the way that a more developed human may interpret it.

With time to develop further and a greater understanding of their world and the actions of their beloved caregiver – you – a baby can start to move on from cries and gestures and add in words, or at least their approximation of the words you are saying.

Baby talk may sound nonsensical to us but the sounds have meaning and are an important stage in newborn communication between simply responding to a stimulus and understanding how to ask for it.

Baby talk should be encouraged, no matter what they say, to keep them trying and enhance the connections between their sounds and people or objects. Additionally, the tone of your voice can add to their recognition and comfort. 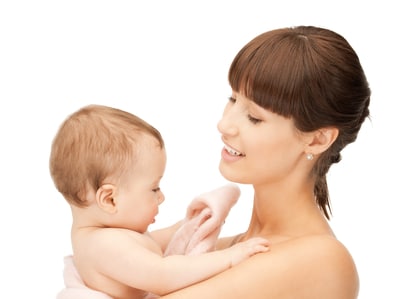 Baby talk and repeated noises have their purpose but there is also a benefit to using real words when communicating to improve verbal recognition. Some would say that it does not matter what you are saying to your child when they are trying to talk with you because of their level of verbal recognition and the greater importance of simply providing that comforting voice; however, there is the argument for deliberately choosing words and trying to teach them the correct ones for the situation.

At this early stage in your newborn’s development, a bottle may be no more than the item their parent brings to ease their hunger and they may be able to express their desire for it with little more than sounds but, with some continued communication on the subject, the noise they choose for bottle can become constant and clearer and they can associate words with objects more easily and build upon their connections with the world.

Newborn communication has a number of purposes and benefits; we can mirror our child’s noises and movements to provide a greater bond and offer some reassurance that we understand them but there is also the factor of aiding future development as they become old enough to talk, even into their toddler years.

Verbal communication with young children helps them to build their vocabulary and understanding of the world, which is why it is so important to read to small children, but this all begins with the connections made with them as newborns and the effects to communicate with them through baby talk and something as simple as a smile.